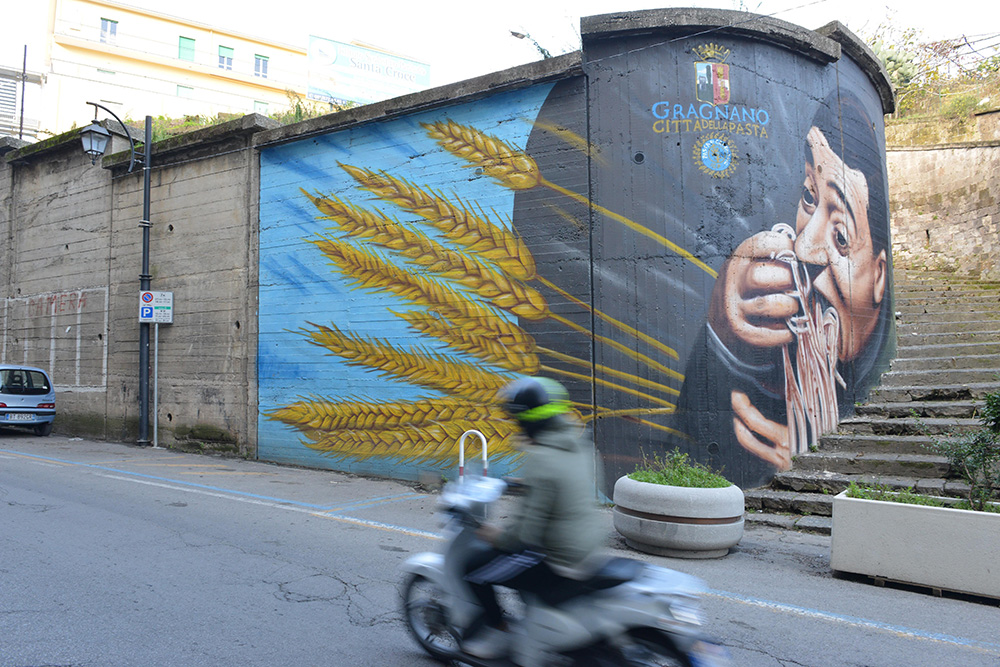 Winding, twisting up Via Roma, there is a persistent, gentle breeze that pulls the dry salt of the Tyrrhenian Sea up from the coast and over the cobblestones of the main street of Gragnano, a tiny hillside town in the shadows of rumbling Mount Vesuvius. It is by design.

The streets of Gragnano, called Città della Pasta, or city of pasta, were designed to channel ocean breezes used to dry pasta that hung outside.

Once, this avenue would have been draped in pasta, row upon row of wooden racks, noodles drying in a wind the street was built to capture and channel. Today, the dozens of pasta factories that once crowded Gragnano—where even the graffiti is spaghetti—have dwindled, and the pasta, still considered some of the best in Italy, is dried indoors.

Alfonso Cuomo is the 10th generation of his family in the business—Pastificio Cuomo. Young and energetic as he discusses pasta’s potential to reinvigorate his community, he is one of my guides during a weeklong exploration of the simple—and surprisingly speedy—pastas of the Neapolitan region.

He starts by showing me the massive building, parts crumbling, where his relatives once made pasta one step, one floor at a time. Whole grains loaded from the roof, working their way downward as they were milled, mixed, kneaded and cut before landing at the street to dry. Today, the whole operation consumes just a few rooms. 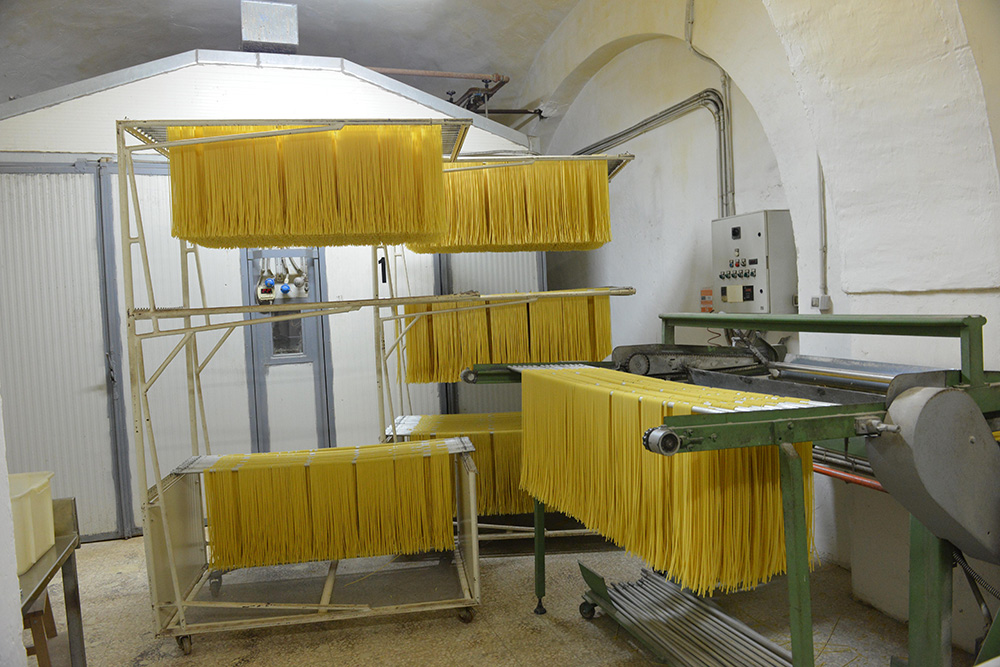 In his shop kitchen, pasta—a thick, twisty spiral called vesuviotti that’s meant to resemble a volcano—is close to boiling. Cuomo is demonstrating a simple pasta sauced with broccoli and sausage. But the first step puzzles me. He heats a generous glug of olive oil in a skillet, then tosses in several whole cloves of garlic. A few minutes later, he throws them away, leaving just the oil in the pan.

Into this garlic-infused oil, he crumbles sausage packed with fennel seeds and chili flakes. Garlic—though there is none left—anise and spice saturate the air. Once the meat is browned, he adds heaps of gently bitter broccoli leaves he’d earlier sautéed in olive oil.

The pasta has barely cooked, but he pulls it out, splashing it and some of its starch-rich water into the skillet with the sausage and greens. It finishes cooking in the pan, quickly absorbing any liquid and all the flavor. In minutes, the broccoli and sausage have thickened into a peppery-meaty sauce that clings hard to the pasta.

The result is rustic, rich and delicious, but I would need to get closer to Vesuvius before I fully understood what I’d tasted. On the outskirts of modern Pompeii, I meet Antonella Scala, a petite whirlwind of laughter and glittering blue eyeshadow who hosts pop-up dinners in her rooftop kitchen.

With the volcano as our imposing backdrop, Scala offers to teach puttanesca, a tawdry-storied sauce I thought I knew. And one that seemingly bore no relation to Cuomo’s broccoli and sausage dish. I was wrong on both counts.

There are many supposed explanations of puttanesca, the least bawdy of which is that it was intended to be quick and dirty. The dirty part I get. Built on the boldness of anchovies, copious garlic, brash olives and capers, fresh herbs and tons of tomatoes, it’s a sauce that plays to our base desires.

But quick? At least not in American-Italian cooking. Simmered, rich and sloppy, sure. The prototypical bubbling stovetop pot. Weeknight friendly? Not so much. 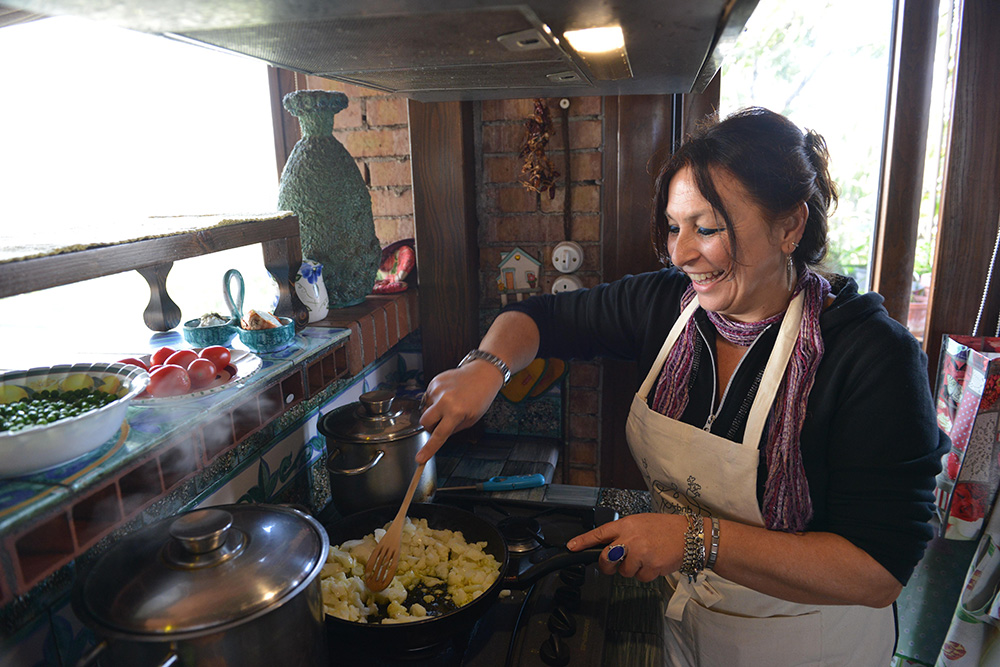 Antonella Scala shows the dry side of sauces.

Scala turns it all on its head. First, there is no bubbling pot; puttanesca is a speedy skillet sauce. Second, the term “sauce” comes with a caveat. Similar to Cuomo’s, Scala’s sauce coats the pasta so thickly it borders on paste. Finally, that ingredient list. Items I thought sacrosanct are nowhere to be seen.

She starts by heating olive oil in a large skillet. As it warms, a head’s worth of whole garlic cloves goes in. A pinch of red pepper flakes. Two minutes over high heat and I hear the sizzling, smell the spice. Next, olives green and black, whole and added by the handful. Then capers, at least ⅓ cup. We’ve nailed the dirty.

It simmers and crackles, but seems hardly a sauce. And where are the anchovies? The herbs? Turns out, there will be none. They aren’t traditional. Instead, Scala mimics Cuomo, removing and discarding the garlic. All of it. The cloves have done their job, she explains; they flavored the oil. Leaving them in would overwhelm the other ingredients.

Then she cracks a can. A can? Here, in the land of perfect tomatoes, she opens a can of cherry tomatoes bathed in the barest of liquid. Spattering slightly, they join the bubbling in the skillet. Even in Italy, canned are more reliably sweet than fresh, Scala assures. By the time they have thickened and reduced, the spaghetti is barely al dente. She drains it and adds it to the skillet, where it absorbs what little liquid there is—yet so much of its flavor. Minutes later, the pasta is perfectly cooked.

It is rich and thickly coated, exceedingly savory. The flavors are simple and distinct: bracing, briny olives; sweet chunks of tomatoes; herbal, salty capers; unifying it, a mellow wisp of garlic. Garnished with parsley and a sparing sprinkle of Parmesan, it’s simply the best tomato sauce I’ve ever eaten. And it took all of about 20 minutes to get to the table.

The similarities become clear. Both recipes maximize flavor by minimizing liquid, creating concentrated sauces that coat the pasta, rather than pool in the bowl. Both finish cooking the pasta in the skillet with the sauce, letting it absorb flavor rather than just water. And both use garlic in a way that is easier and better balanced, allowing it to infuse the dish without domineering it.

View all posts by Pasta Cuomo →